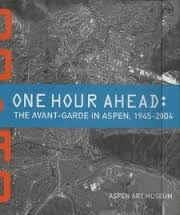 An AAM publication. How does a museum tell its own story? This is an especially difficult question for an institution that is so out of the ordinary. Despite its “museum” designation, the Aspen Art Museum holds no collections. Aspen itself is equally idiosyncratic (some might even say quirky). The size of the town—roughly five thousand full-time residents in two square miles—belies the institution’s participants, support, and ambitions. With its astronomical housing costs, Kafkaesque building codes, and often-incendiary political debates, Aspen seemingly strives to be out of step with the rest of the world. During the 1960s, the town was even in its own time zone; unlike the rest of Colorado, Aspen observed daylight savings time, thus putting the city “one hour ahead” of other communities for part of the year. It is precisely these qualities, however, that define not only the city but also the art museum and its character. The unusual and remarkable nature of Aspen is precisely “the point” and becomes the universal subtext to the story of Aspen’s art history. Aspen attempts things that most cities would never try.