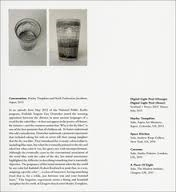 Conversation between Hayley Tompkins and Heidi Zuckerman, Aspen, 2013. In an episode from May 2012 of the National Public Radio program “Radiolab,” linguist Guy Deutscher noted the seeming opposition between the absence in most ancient languages of a word for the color blue—it does not appear in the poetry of Homer, for instance—and “Why is the sky blue?,” is one of the first questions that all children ask. To better understand this odd contradiction, Deutscher undertook a personal experiment that included asking his wife to never tell their young daughter that the sky was blue. They introduced her to many colored objects, including blue ones, but when he eventually pointed to the sky and asked her what color it was, his query met with incomprehension. Although she eventually came to the conventional association of the word blue with the color of the sky, her initial uncertainty highlighted the difficulty in describing something that is essentially objectless. The poignancy of this initial moment when the sky could be any color led “Radiolab” cohost Robert Krulwich to posit that, in a way, assigning a specific color “… is a loss of innocence; having something fixed that is, for a while, just between you and your frenzied heart.” This linguistic experiment seems a fitting and beautiful metaphor for the work of Glasgow-based artist Hayley Tompkins.